Title: Under the Spray
Fic or Art: FIC
Hurt or Comfort: COMFORT
Warnings: set directly after 13x12
Prompt: "13x12 - After talking to Rowena about seeing Lucifer's true face, Sam decides to open up to Dean"

hollyhobbit44
Link: Dean was on his fourth beer of the night. The ice pack on his leg had long stopped being anything more than a warm wet bag. He really should have gone and got a fresh one from the freezer. But he couldn’t bring himself to move. He took another long draw from the bottle, letting the bitter liquid sit on his tongue.

Then, through the quiet ticking of the Bunker, a great crash reverberated through the stillness. Dean was up on his feet before he knew what he was doing, the throbbing ache in his leg forgotten.


View the entire thread this comment is a part of

Title: ‘Your hair Sam, it’s magnificent.’
Fic or Art: FIC
Hurt or Comfort: HURT
Warnings: mental disassociation, not self-harm but self-mutilation (of hair). Minor dialogue spoilers for 13x13.
Prompt: "Sam goes to the barbers, it goes horribly wrong"
Link: Sam stood there and stared into the mirror. A man stared back at him. It was man that Sam hardly recognised.


View the entire thread this comment is a part of

Title: Between Now and Then, Life Happened
Rating: PG-13
Pairings: Lancelot/Merlin (past), Merlin/Gwaine, Merlin/Gwaine/Lancelot
Wordcount: 17,353
Summary: Lancelot’s death broke something in Merlin, but after finding solace and love in Gwaine’s arms he begins to heal. What happens when the inconceivable happens? Who will he chose?
Authors Note: written for the

babykid528 lovely art. Unfortunately I completely failed on my promise of smut for her, it came out much more fluffy and h/c than expected but I hope she, and all of you, enjoy this. It was a tumultuous ride and at times I wanted to throw the whole fic out and start again but special thanks go to my betas B and H for listening to me grumble and reassuring me that yes, it was legible and understandable and for reading all the drafts and thousands of words that I decided to bin even. Any leftover mistakes are my own (I tended to go back and add things after they were beta’d :S ) 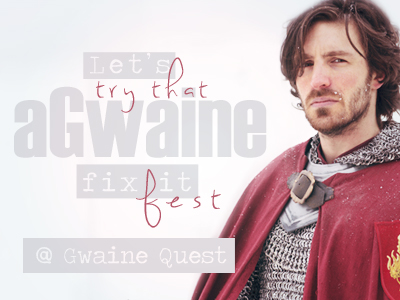 I have already signed up for merlin redux which I haven't started working on yet and had some kind of mental breakdown during which I signed up for paperlegends and have since chugged out 8k in story already AND still have to get the last of my fic back from the betas for the reverse bb and then there is the possibility that I might want to do a fic for merlin muses....

It's all too much! But I love gwaine and feel he deserves some good fic after the raw deal he got at the end of the series.

If only I could quit my job and just write full time.... Thankfully my reverse bb fic will be done and posted at the weekend so I will have something other than my rambles on my journal for the first time in a while!

Crazy woman that I am I am thinking of signing up to the paperlegends challenge this year. It will be the final one as Merlin is over and I can see myself having less time for writing in the next years I thought I might as well... Maybe I will sleep on it first, I have a while to decide and have to finalise my reverse bb fic first!

On that note anyone willing to beta my reversebb fic please do let me know!

Title: The Magic of the Game
Rating: PG-13
Pairings: Merlin/Gwaine
Warnings/Content: Modern!AU, Modern-Magic!AU
Word Count: 10K
Summary: Gwaine starts at the University of Camelot and falls right into the swing of University life; great house mates, lectures and of course the Uni footie team, captained by the tenacious Arthur Pendragon. But it is Pendragon's elusive flatmate Merlin that keeps capturing Gwaine's attention.

uni_merlin challenge for prompt no. 98: Gwaine discovers Merlin's magic while on watching one of Arthur's football matches and wants to know what it'd be like to have it, too. Kindly beta'd for me by

destiny_chicken on very short notice so big kudos to her. Also thanks go to the prompter, the huys at the comm for hosting a great fest and to all how have commented or lefy Kudos already over at AO3.

Just on the tube on my way home from a brill night.

At first it was like the gods were working against me (suck daughter, up all night, clingy child the following day etc) so I didn't actually get to go to the pre show supper which sucked a but but responsibilities and all that...

Anyway when I did manage to finally get to the old vic I had some champagne, queued for the loo etc

I was sat next to a couple of the composers of the musicals. I know one composed the second of the night so it was very interesting (funny) to listen in on their commentary of the whole thing.

Colin was first. It was slightly surreal but as expected, excellent. Colin swaggered on stage and it was like Dolma creeped out from behind that rock, only with pink velour, an almost crop top and an Irish accent. It was hilariously fantastic. And then there was the dancing, jazz hands, lady gaga impression and the flash dance pose and it was only a minute into it!

Im not just being biased when I say this one was my favourite because it was just so funny. And the cast gelled really well on stage. The. The big twist came when the polish hottie wasn't polish, Colin wasn't really gay and the old women wasn't really in love with the meat counter workers son! *gasp* lol.

The next performance was more somber but the singin was fantastic!

Anthony heads Musical was about sex and again very funny. Enhanced by the brilliant cast and one cast member forgetting her lines half way through a monologue and scavenging in her pockets for her notes. But the way she handled it had the audience in stitches.

Thr last performance was probably my least favourite but tht is hardly saying anything as they were all brilliant.

Matt Lucas was a brilliant and funny host as I had expected him to be and jeff goldblim and Kevin spacey riffed brilliantly off each other.

The whole team got a very well deserved standing o

One down pint of the night is tht due to unexpected circumstances (previously mentioned sick/clingy 4yr old) I couldn't go to the after show party which I am sure is in full swing right now :( but I did have a fantastic night

Bravi to all the talent that went into putting this on. 4 musicians created in 24 hours! Crazy people!